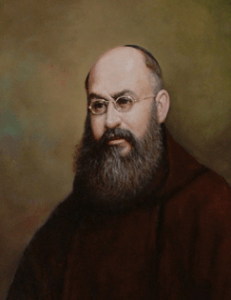 Valls Matamales was born 3 May 1870 in Benaguacil (Valencia) and was baptised on 4 May in the Parish of Our Lady of the Assumption in Benaguacil. He received Confirmation in the parish of Liria (Valencia). He was the son of Valentin Valls and Mariana Matamales. He entered the Capuchin Order in 1890, receiving the habit on 28 May 1890. He made temporary vows on 28 May 1891 and perpetual vows on 30 May 1894. Ordained priest on 22 September 1894 he celebrated his first Mass in the Capuchin friary at Sanlúcar de Barrameda (Cadiz).

Sr. Maria Amparo Ortells said of him, “He was a very modest religious. His gaze was always recollected. He was very humble and everything seemed too much for him. He was known for his great spirit of prayer. He was very devoted to the Blessed Virgin.” “His companions in religion considered him a good religious. Faithful in his observance of the Franciscan Rule he was very devoted to our Father Saint Francis.” His work in the apostolate included preaching, the ministry of confession and spiritual direction. “By preference he worked as confessor and assistant the Third Order of Saint Francis.” “His field of apostolate was mainly that of preaching.” In the Capuchin Province of Valencia he was regarded as one of the better preachers. His clear devotion to the Virgin remained enshrined in the little work dedicated to the Virgin of Montiel, with the title: Historias, Novenas, Favores y Montielerías de Nuestra Señora de Montiel, venerada en su ermita de Benaguacil, which in 1934 came out in its third edition.

He was living in the friary of Massamagrell (Valencia) when in 1936 religious persecution was unleashed in Spain. He then took refuge in the house of Mrs. María Orts. In his hiding place he desired to die for Christ in the Catholic Church. “He did not react against martyrdom,” stated María Orts. To the contrary, he ardently longed to die for Christ. His response to the risk of danger was calmness and a courageous heart. “They will kill me,” he said, “but nothing will happen to you’, as in fact happened.”

He was arrested on the night of 24 August 1936. Taken by car to Valencia he was killed that same night. In that moment, said the same María, “the servant of God asked us to pray that he not turn back on his journey. The militiamen were armed with rifles and machineguns. The Committee of Vinalesa took him from our house for questioning. An hour later the led him to the place of martyrdom. I know that along the road they insulted and mistreated him, accusing him of having preached against Communism in Benaguacil. To which the Servant of God replied, “I have only preached the teaching of God and the gospel.”