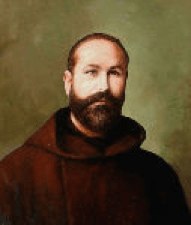 Aurelio was born in the Spanish city of Valencia in 1896. As a young man he felt attracted to the religious life and joined the Capuchin Order. During the religious persecution in Spain he had to leave the friary and seek refuge with relatives. He was arrested and was killed shortly afterwards on 28thAugust 1936. He died with the cry “Long live Christ the King!” on his lips. At the same time and for the same reasons 11 of his fellow Capuchins and 5 Capuchinesses were also killed. They were beatiﬁed by Pope Saint John Paul II on 11th March 2001.

José Ample Alcaide was born to Vicente Ample and Manuela Alcaide on 3 February 1896 in Vinalesa (Valencia), the third of seven children. He was baptised fourth days later (4 February) in the parish of Saint Honoratus the Bishop. He received Confirmation on 21 April 1899. He did his first schooling in the Seraphic Seminary of Massamagrell (Valencia). He took the Capuchin habit in 1912. He made temporary profession on 10 August 1913 and perpetual profession on 18 December 1917. He was then sent to Rome for further studies and was ordained priest there on 26 March 1921 by the Archbishop of Philippi, Giuseppe Palica.

On his return to Spain he was appointed director of the philosophy and theology student house in Orihuela (Alicante). He prudently carried out this office to general satisfaction for the rest of his life.  “He enjoyed the reputation of a saint among the faithful,” said the diocesan priest Fr. Pascual Ortells. “To that reputation he joined wisdom. He was a faithful observer of the rule of Saint Francis. He committed himself completely to help the young friars so that they might become perfect religious.”

During the revolution of 1936 all the religious in the friary of Orihuela dispersed on 13 July. Aurelio sought refuge in the family home in Vinalesa where the militiamen captured him on 28 august 1936. His body was buried in the cemetery of Foyos (Valencia), near to where he had been killed. His remains were exhumed and transported to the cemetery of Vinalesa on 17 September 1937. Now they rest in the Chapel of the Capuchin Martyrs in the Magdalen Friary of Massamagrell.

Aurelio kept himself inwardly ready and open from the moment of his capture until his death. He remained always faithful to Christ.  “He remained calm right up to the last moment, encouraging all of us who were about to die. When everything was ready for the execution, he exhorted us to recite the formula of the act of contrition. And that is what we did. When the Servant of God was saying the formula of absolution, one of the militia slapped him twice. One of the group of militia told his companion not to slap the friar any more because it was not worth the effort, given the short period of life that remained. The Servant of God remained calm before the injury and continued the absolution until the end. As soon as the Servant of God had finished his sacred duty, a volley rang out and we all fell while repeating with him, “Long live Christ the King!”

From the letters of Blessed Aurelio of Vinalesa, priest and martyr

Everything passes except the love of God

I don’t know what God has in store for me, but in case he may wish to choose me as a victim, I want to write you a few words of affection and advice coming from the depths of my heart.

As I am writing this to you, brothers who were born on the same Hispanic soil and suckled with the milk of the same faith are persecuting one another as if they were irreconcilable enemies. And the fury of the fratricidal strife has reached such a pitch that everywhere you see nothing but ruin and death, especially in the Church of God, which is now being cruelly cruciﬁed in our homeland, just as He was on Calvary.

What are we to do, and what are they to do who will be left alive after this terrible massacre? As far as God’s ministers are concerned, they are to be holy as God is holy. And how will you put this formula into practice yourself? Now as a seminarian, and later as a priest, you must live with the spirit of faith, and in whatever you do, great or small, (according to the graces God chooses to send you) refer everything to God with the purest intention of pleasing Him. Seek the love of God in all your actions. What use is it to gain the whole world at the cost of your soul? We priests run the risk of going after the good things of the world, collecting titles, honours, and wealth, and these will be a greater obstacle to us at the hour of our death than they would be for the ordinary faithful.

On the other hand, the love of God will sweeten everything for us and make it all easy and bearable, because love is stronger than death. And when death comes, God’s love will still pursue you into the blessedness of eternal life. Worldly things pass away, but love does not pass away, as the holy Doctor Saint Bonaventure says in the beautiful phrase: “Everything passes except the love of God”. Seek God, therefore, gently, constantly, and boldly (but without anxiety or undue haste). Behave in all things like a humble servant of God and of Jesus Christ and our dear Mother. Thus you will fulﬁl the plan of Divine Providence in your regard and give great glory to your uncle, just as I hope you will give glory to God and remember me in your prayers an sacriﬁces.

Remember me to your superiors, who are workers in the Lord’s vineyard, and receive the blessing of your uncle, who embraces you in the Lord.

O God,
you granted to Blessed Aurelio and his companions
the grace of giving the supreme testimony of love
by shedding of their blood.
May we never be parted from your love
and always remain faithful to Christ,
who lives and reigns with you and the Holy Spirit,
one God, for ever and ever. Amen.