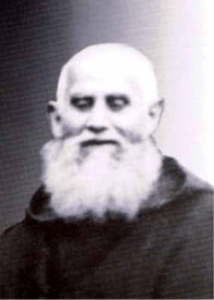 José Bleda Grau was born in Lugar Nuevo de Fenollet (Valencia) on 23 July 1867 and baptised the same month, on 28 July, in the parish of san Diego de Alcalá. The parish priest, Fr. Antonio Donat, gave him the name José. He was the first of three children born to José Bleda Flores and Rosario Antonia Grau Más. In his home town they remembered that he was “a child of great piety, even as a toddler. At home,” they say, “there is still the stone it is said he knelt on for prayer. He belonged to a very Christian family. He desired to embrace a religious vocation from his childhood. However, since his brother was doing military service in Cuba, he had to help his parents, and so entered the Capuchin Order later, after the return of his brother.”

He entered the Capuchin Order on 2 February 1900, receiving from the hands of the Provincial minister, Br. Luís de Massamagrell, the Capuchin habit as a lay friar, at thirty-two years of age. He took simple vows on 2 February 1901 and perpetual vows on 14 February 1904 at Orihuela. His confreres say of him that “he was a son of obedience … If temperament was extraordinarily peaceful. His most noteworthy quality was his abandon to the will of God … He was most observant of the Rule and Constitutions … Br. Berard was a holy man. He never dared to raise his gaze in any direction … He was a very exemplary religious. He perfectly carried out the tasks given him by the Superiors.  All those who knew him loved him.”  After his profession he was sent to the friary of Orihuela (Alicante) where he spent his whole life as a questor and tailor of the fraternity. He edified the people of the city with his exemplary life when he asked for alms. He edified his fraternity with his goodness, humility and holiness of life.

When the friary closed in 1936 because of persecution, Br. Berard took refuge in his home town with relatives. He dedicated himself to prayer and works of charity, always displaying patience and resignation. He was almost completely blind. On the night of 30 August 1936 he was taken by members of the local Committee on the pretext of his having to make some statements. They put him in a car led him away quickly on the road to Beniganim, in the district of Genovés (Valencia), where he was killed. In the civil Register the date of his death is given as 4 September 1936.

A resident in the town, Francisco Cháfer, remembered how he discovered Br. Berard’s body. “At the end of August, on a very hot day, I was going with my father to the nearby town of Beniganim and I saw the body of an old man in a ditch by the road. My father told me to go on ahead and I, a boy of thirteen years, overcome by curiosity, went closer and saw that that he had been shot in the eye and had bled copiously.” In this, something is known of his death. His body was buried in a common grave in the cemetery of Genovés. It has not been possible to identify his remains.