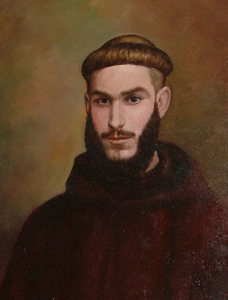 Enrique García Beltran was born in Almazora, in the diocese of Tortosa and province of Castellón de la Plana, on 16 March 1913. He was baptised in the parish church the same day. His parents were Vicente García and Concepción Beltrán. His childhood was spent in a deeply religious environment. His uncle, Vicente Beltrán says, “In his early childhood he was the one called everyone called an angel. The toddler never left the church. He spent his time either in the church, at school, or at home.” At fourteen years of age he entered the Seraphic Seminary at Massamagrell. He received the Capuchin habit on 13 August 1928 from Br. Eloy de Orihuela, guardian, definitor and novice master in the convent at Massamagrell. He made temporary profession on 1 September 1929 at Ollería into the hands of Br. Pio de Valencia. He took solemn vows on 17 September 1935.

The Revolution surprised him when he was still a deacon and was preparing for ordination to the priesthood. “His temperament was jovial and docile.” Among his confreres “he enjoyed a reputation for piety. He was man of interior life and had a great devotion to Saint Joseph. He loved the liturgy. He dedicated himself to the study of sacred music with the aim of adding splendour to divine worship. He distinguished himself in the choir for his devotion when singing the canonical hours. He was always temperate and mortified in his meals.  He was, over all, very humble and noteworthy for his manner of behaviour and his submission…” He is also remembered as “faithful in his observance of the Rule and Constitutions, as much by night as by day.”

At the outbreak of the Revolution he took refuge in his family home. He prepared himself for martyrdom with prayer and study, with great serenity and courage. One day in the month of August 1936, two militiamen came to the house. They arrested him and took him to the watch house of the Civil Guard that was being used as prison. A fellow inmate, Miguel Pesudo, says that he lived with Br. Enrique as a cell mate. “Bro. Enrique was always jovial and joyful. He was at one with the will of God.” On 16 august 1936 he was taken outside the jail and led with a group of seculars to a place called “la Pedrera” on the road between Castellón de la Plana and Benicasim. There they were killed, as they cried, “Long live Christ the King!”

When the war was over, his remains were identified and brought the cemetery of Almazora.