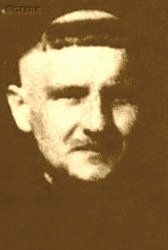 Blessed Florian was born in Zdzary near Nowe Miasto on 3 January 1912. His parents, Pawel and Anna Misztal, were farmers. At his baptism on 4 January 1912 he received the name Jozef. His mother died when he still a toddler.  His father remarried. When he had completed primary school in Zdzary he felt a strong desire to study and to become a Capuchin. Thanks to the Capuchin friars in Nowe Miasto he finished high school and then completed his studies at the Capuchin College of Saint Fidelis in Lomza in 1927. Of average ability, he made up for this with his diligence and industriousness. One of his fellow students, Br. Cajetan Ambrozkiewicz described him this way: “A holy soul, he was solid, frank and joyful, and already a little different from the rest of us who were always playing with our heads in the clouds.” When he was at school he belonged to the Secular Franciscan Order. He then joined the Capuchins in Nowe Miasto and began his novitiate on 14 August 1931. With the religious habit he also received the name ‘Florian.’ In the novitiate he distinguished himself for his zeal, generosity and devotion. He made temporary vows on 15 August 1932 and final vows 15 August 1935 after he had completed philosophy. Then in Lublin he continued theology.

On the conclusion of the theological studies, Florian was ordained priest on 24 June 1938 and was then sent to the Theology Faculty of the Catholic University of Lublin to study Sacred Scripture. At the outbreak of war on 1 September 1939 he was in Lublin.  In those critical months and days he did not abandon the friary like some others. Because of the persecutions many ecclesiastics went into hiding and there was no one who could bury the dead. With great courage and generosity Florian took up this task himself.  In reality he was doing nothing other put into practice that fundamental phrase in religious life that he had added with his own hand to his ordination card: “We are ready to give you not only the Gospel but our very lives.” This phrase expressed the essence of his life.

He was unable to continue for long in Lublin. On 25 January 1940 the Gestapo arrested him and the other brothers of the friary and imprisoned them in the city castle. His arrest was a shock, but his innate optimism and cheerfulness did not succumb. With some other confreres he was taken to the concentration camp of Sachsenhausen near Berlin on 18 June 1940. Even here he did no t lose his sense of humour, even though life in the camp was so terrible. On 14 December 1940 he was transferred to Dachau and given the prison number 22,738. His fellow prisoners called him the “spiritual father” of death row, the “sunshine of the camp.”

The cold affected him and badly undermined his physical condition. He had a strong, robust build and therefore had a stronger appetite.  Added to debilitating effects of hunger there was also sickness. In the summer of 1942 he fell ill and moved to the camp hospital, the so called “fast lane”. At that time those unable to work and the infirm were set aside for transfer to a place with “better conditions.” Florian was assigned there too. After some weeks, despite the hunger rations and confinement in the hospital, he recovered enough to be discharged. However he was not returned to his block. As a convalescent he was transferred to the invalid block (number 29). A prison camp companion, Br. Cajetan Ambrozkiewicz, recalls Br. Florian’s manner: “Some priest friends who managed to get out of the invalid block say that Br. Florian Stepniak brightened up that unhappy barracks. The people confined there were destined for death. The hardship killed them by the dozens, and countless others were led away in groups to who knows where. Only later did it become known that they had been eliminated in the gas chambers near Munich. Anyone who has not experience the camp has no idea of what a humble word of comfort would mean to those people of the invalid block who were just skin and bone, immersed in a sea of death; or what would mean the smile of a Capuchin reduced to the same extreme as they.”

When the turn came for the letter “S” (for Stepniak), Florian was taken to the invalid section even though he was feeling well and able to return to work, He was gassed on 12 August 1942. His body was probably cremated in the ovens. The camp authorities return his habit to his parents in Zdzary, telling them that their son Jozef had died from angina.