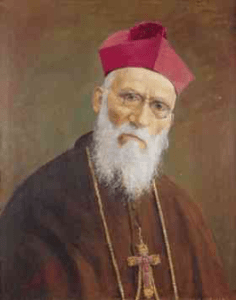 He was born on 23rdNovember 1863 in Fiumicello di Campodarsego (Padua). He joined the Capuchin Order and lived the life of the friary for 25 years, devoted to study and to the perfect observance of the Rule and the austerity of the Order. In 1902 he was elected Provincial Minister of Venice. But on 13thApril 1904, Saint Pius X personally appointed Brother Andreas as Bishop of Treviso and he was in charge of the diocese for 32 years. Catechesis, preaching, and the sanctiﬁcation of laity, religious and clergy were the hallmarks of his pastoral zeal. He aimed to equip the local church to be “militant” and to call all, clergy and lay people, to a life of holiness. At the outbreak of the First World War (1915-1918) Treviso was on the frontline. Bishop Longhin remained at his post even when the civilian authorities escaped to safer places. He led the destiny of the town with heroic courage. God wanted to purify his faithful servant and afﬂicted him with an illness that deprived him progressively of his mental faculties. Longhin endured his suffering with extraordinary faith and total abandonment to the will of God. He died on 26thJune 1936 and was beatiﬁed by Saint John Paul II on 20thOctober 2002.

Andrea Giacinto Longhin, bishop of Treviso, was born in Fiumicello di Campodarego (Padua) on 22 November 1863 to a rural family. He was baptised Giacinto Bonaventura the following day. On finishing primary school, at sixteen he decided to become a Capuchin Friar. He faced a struggle with his father who opposed the idea, not wanting to lose his only son from work in the fields. Giacinto prevailed, and was clothed in the Capuchin habit at Bassano del Grappa (Vicenza) on 27 august 1879 and received the name Andrea. In the friary at Padua he completed his studies and made final profession on 4 October 1883. After his theological studies in Venice he was ordained priest on 19 June 1886. From 1888 he was spiritual director and teacher in the Capuchin seminary in Udine. From 1889 he was director and professor of the Capuchin clerics in Padua and of the Capuchin theological students in Venice from 1891. On 18 April 1902 he was elected provincial superior.

Saint Pius X appointed him bishop of his home diocese on 16 April 1904. Pius was pleased to have “chosen one of the more beautiful flowers of the Capuchin Order” for his own diocese. On 12 August 1907 Pius X elaborated, “It is one of my first-born sons, to whom I have entrusted my beloved diocese. I rejoice every time they report his praises to me. He is truly holy and learned, a good, old fashioned bishop whose apostolic zeal will leave an indelible imprint.” Consecrated bishop in Rome on 17 April 1904 he entered Treviso on 6 August. He was determined to be a good shepherd, and would not spare “effort or sacrifice, ready to give all his blood and his very life itself” for his church. For thirty two years he was “the good shepherd of the Church in Treviso”, while continuing to live in Capuchin austerity and poverty.

The proclamation of the word was one of his more preferred ministries. After the example of Pius X he was concerned about the catechesis of the children, of the young in youth associations, and of Catholic men. He encouraged learning competitions, study days, catechists days and two diocesan catechist congresses (1922 and 1932). He was seen as “the catechism bishop.” Like a father he loved and accompanied his priests. He cared for them in a special way as soon as they left the seminary. He preached monthly retreats and spiritual exercises for his clergy, and conducted pastoral visits to all of the two hundred and thirteen parishes three times (1905, 1912, 1926). He organised a synod for them in 1911. This was considered a master piece of organisation and precision, which Pius X appreciated very much. Spiritually he followed Saint Maria Bertilla Boscardin, the servants of God Giuseppe Toniolo, Guido Negri and Mother Oliva Bonaldo. He had a close friendship with the Capuchin Saint Leopoldo Mandic and with Saint Pius X. The latter friendship is well documented by a copious correspondence and his own description, “We who … were so much part of his dear heart.”

He was a real leader among the lay people, particularly in the youth movements. He was convinced, and insisted even in his testament that “families and parishes, the country and the world need saints.” In April 1914, he declared sacred “the right of the workers to organise themselves … into unions for their economic and moral advancement.” In 1920 he supported the Leghe Bianche, a Christian union movement, so showing himself to be bishop of the poor, workers and farmers. In 1930 at Treviso he founded the Pius X Episcopal college to ensure a Christian formation for the young. Courageously he faced the trials of the Great War of 1915-18, without deserting his post. He remained close to the citizens, refugees, soldiers and the wounded, encouraging them. On the 27 April 1917 he made a vow to erect a church dedicated to the Blessed Virgin, Helper. Called the “bishop of the Piave and of the Montello”, honoured with the War Cross of Merit, at the end of the war he travelled throughout the diocese to encourage the reconstruction of forty seven ruined churches, to comfort souls and re-awaken the Christian life with courageous interventions to save his faithful from anti-Christian and subversive ideologies.

The Veneto bishops regarded him as the “Patriarca di compagna”, an advisor, a distinguished theologian and tireless apostle. In October 1923 Pius XI recognised the “great service” rendered by Longhin: “He has worked so much for the church.” In 1923 he was apostolic administrator of the diocese of Padua, and apostolic vistitator and administrator of the archdiocese of Udine in 1927-1928. He was appointed titular bishop Patrasso on 4 October 1928. On the twenty-fifth anniversary of his episcopal ordination in 1929, the servant of God, cardinal Pietro La Fontaine, wrote: “With delight and edification I see in him a copy of the gospel Good Shepherd, so similar to the original.”

Struck down by ailments on 3 October 1935 his Calvary lasted for nine months of suffering. He celebrated Mass until 14 February 1936. From that day he could only receive Communion each day instead. He died on Friday 26 June 1936. His funeral celebration on 30 June was striking, with the unanimous chorus, “He truly was a saint.” From 5 November 1936 his remains were entombed in Treviso Cathedral. On 22 November 1984 his body was found to be “entire, with some parts still tender, but in large part mummified.” The initial investigation was conducted in Treviso, 21 April 1964 to 26 June 1967, with processes in Padua and Udine. The decree on the revision of his many writings was issued on 17 December 1971. The decree introducing his cause is dated 15 December 1981. The apostolic process was completed in Treviso from 18 June 1982 until 26 June 1985. The Positio was delivered in 1998 and the decree of his heroic virtues was issued on 21 December. John Paul II declared him blessed 20 October 2002.

Holiness is within the reach of everyone

We are all bound to strive for holiness in the Christian and religious life. Our ignorance and sloth makes us think that holiness is impossible for us, because we imagine that it consists in ecstasy ‐ as if, in order to be holy, it were necessary to have the gift of rapture or visions or prophecy, or miracles. We picture holiness as a cross, as though it were necessary to practice great fasts, austerities, penances and scourgings, and wearing a hair‐shirt etc. This is misleading. Holiness consists of much simpler things that are within the reach of everyone. Nobody is told: scourge yourselves, fast, go into ecstasy. No! Nobody expects us to do that. The only thing we are told is: “Love God with all your heart, with all your soul, with all your strength, and love your neighbour as you love yourselves.” This is where all perfection of Christian life and true holiness are to be found. Who in this world can say that he cannot love God? That he cannot always please Him by doing His will, which is made plain to us in the ten commandments, in the precepts of the Church and the commands of our lawful superiors? Who can say: “I am unable to avoid deliberate venial sins, faults against charity, humility, and obedience?” To a sister who asked how she could become holy, Saint Thomas said: “If you want to! Do you understand, my dear Maria? If you want to be holy, it is easily done. Grace will not fail you, and with grace we can do anything.”

Almighty God,
you gave to Blessed Andreas Giacinto, your bishop,
the gift of building up your Church
by proclaiming the Christian faith
and the practice of pastoral charity.
Through his intercession, may we give constant witness
to your love by serving our brothers and sisters.
We ask this through our Lord Jesus Christ your Son,
who lives and reigns with you and the Holy Spirit,
one God, for ever and ever. Amen.