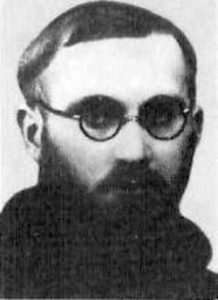 Henryk was born 22 March 1908 to Jozef and Franciszka Franaszczyk in the village of Zachorzev. He was baptised Jozef in the parish of Slawno in the diocese of Sandomierz (Poland) on 19 April 1908.

At the conclusion of his primary school education he presented himself to the Capuchin College of Saint Fidelis in Lomza which he attended for two years before going to the Capuchins in the commissariat of Warsaw.  He was clothed in the Capuchin habit 14 August 1927 in the friary at Nowe Miasto, and received the name Henryk.  One year later, on 15 August 1928 he made temporary vows. He was then sent to Holland, to the Capuchin Friary of the Paris Province in Breust-Eysden. After two years of philosophy he was sent to Rome to study theology. There he took perpetual vows on 15 August 1931 and was ordained to the priesthood 30 July 1933. He was asked to continue his studies at the Gregorian University while living at the International College of Saint Lawrence of Brindisi. He completed his licence in theology in 1935.

On his return to Poland he was assigned to the friary of Lublin where he taught dogmatic theology at the local Capuchin seminary. He was then appointed rector of the seminary and vicar of the friary. In the friary church he often preached with passion and fervour. Then war broke out on 1 September 1939.

The guardian of the Lublin friary was a Dutch friar, Br. Gesuald Wilem. (At this time friars from Holland were assisting the Polish friars.) Gesuald had to resign the service of Guardian and was compelled to leave Poland. Henryk was then appointed Guardian. It was a Guardian and Rector that he found himself in a very delicate situation. Because of the war the lessons for the 1939-1940 academic year began later than usual. The atmosphere was extremely restless and tense. The German troops were ruthless and arrests followed one after the other without pause. In this climate Henryk tried to reassure up his seminarians.

On 25 January 1940, the German Gestapo arrested twenty Capuchins from the Lublin friary, and among them was their Guardian, Bro Henryk Krzysztofik. Their first internment was Lublin Castle where they awaited imprisonment.

Henryk said, “Brothers, while we still have our faculties, let us formulate this goal: Whatever will befall us in the future, whatever happens, let each of us make it a propitiatory offering to God.” During the time spent in prison he was caring and attentive to everyone. He organised that Mass be celebrated at dawn. On 18 June 1940, together with all his confreres, he was transported to Sachsenhausen concentration camp near Berlin. There “he took care of each of us, even though conditions were much worse,” wrote his fellow inmate, the now deceased Br. Ambrose Jastrzebski. In autumn 1940, when he first received some money, be bought two loaves of bread in the camp store. He divided them into twenty-five portions, according to the number of Capuchins. He said, “Come brothers, let’s eat the gifts of the Lord. Take advantage of this while there is something to eat.” Br. Ambrose described that brotherly gesture, “His was a very noble act. Only someone who has been in a concentration camp can appreciate how much self-denial – or rather, heroism – is needed to distribute two loaves of bread while starving himself, and not devour them away straight away himself!”

On 14 December 1940 Henryk and his brothers were transferred to the concentration camp at Dachau where he received the prison number 22.637. He did not spare himself at all in the extreme conditions of camp life. Although he weak himself and unsteady on his feet, he helped the others who were weaker, especially the older friars. In July 1941, given the complete exhaustion that already prevented him from walking, he was assigned to the camp hospital.  This was the equivalent of a death sentence. From the hospital, he got a secret message out to his clerics. One of the recipients, Br. Cajetan Ambrozkiewicz, consigned the message to memory: “Dear Brothers! I am in the ‘fast track’ of block seven. I am frighteningly thin because I am dehydrated. I weigh thirty-five kilograms. All my bones hurt. I am stretched out on the bed, as on the Cross together with Jesus. I am glad to be with him and suffer with him. I am praying for you and offer my sufferings to God for you.”

He died 4 August 1942 and was cremated in ovens of Camp Twelve.

Translation based on the article in Sulle orme dei Santi, edited by Costanzo Cargnoni, Rome, 2000, p.126-128