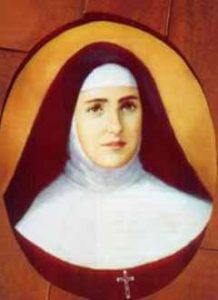 Josefina Calduch Rovira was born in Alcalá de Chivert, in the diocese of Tortosa and the province of Castellón de la Plana, on 9 May 1882. Her parents were Francisco Calduch Roures and Amoparo Rovira Martí. Josefina was the last of five children. Her acquaintances said of her, “During her childhood she life in a very Christian atmosphere. She showed charity to the needy even then. With a friend, she used to take meals to an old woman and helped her with her personal cleaning and with cleaning the house.” During her youth she knew a very Christian young man of the town. She interrupted her relationship with him to embrace a more perfect state of life, with the consent of her parents. She entered the Poor Clare Monastery in Castellón de la Plana, receiving the habit in 1900.

Her brother José said, “Her vocation was the only reason she entered the monastery.” She made temporary vows on 28 April 1901 and perpetual vows on 30 May 1904. Her sisters say, “She had a peaceable and amiable temperament, always joyful. She was an exemplary religious, always content. She was very observant of the Rule and Constitutions. She was very modest with her eyes, prudent in her speech and very mortified, especially in regard to meals. She was highly regarded by the community. She led an intense interior life and was very devoted to the Blessed Sacrament, to the Blessed Virgin and to Saint John the Baptist.” In the monastery she was novice mistress, a task she “did with great zeal so that the novices would be observant religious. She made no distinction between the novices,” recalled Sister Micaela. She was re-elected for another three years, a term she did not complete because of arrival of the revolution. At its outbreak, Sister Isabel went to Alcalá de Chivert (Castellón) where she had a brother a priest, Mosén Manuel. He too will be killed later.

During this time in her home town she dedicated herself to recollection and prayer. Together with Fr. Manuel, a Franciscan friary, she was arrested there on 13 April 1937 by a group of militiamen. Both were led to the local Committee of Alcalá de Chivert, and suffered injuries and maltreatment. She was killed in the district of Cuevas de Vinromá (Castellón) and buried in its cemetery.