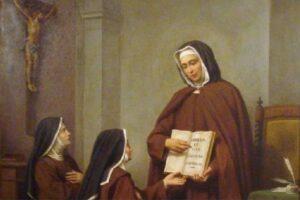 The place and year of the birth of Maria Lorenza Longo are not precisely known. She was certainly of Catalan origin, probably born in Lleida around 1463 from the noble Riquençà or Requesens family. At a very young age, she married Juan Llong, regent of the Council of Aragon. One day during a party she was poisoned by her maid, who harbored resentment towards her. As a result, she suffered paralysis in her lower limbs. Yet in 1506, despite her debilitation, she followed her husband to Naples.

In 1509, after the death of her husband, Maria Lorenza was led on a pilgrimage to the Shrine of Loreto, where she obtained the grace of a sudden recovery. After returning to Naples and arranging for the accommodation of her children, she devoted herself entirely to the exercise of charity at the hospital of San Nicola al Molo. In 1519, encouraged by Ettore Vernazza, she pursued the foundation of a hospital for incurables, which was opened on March 23, 1522.

The so-called “incurable” patients were mainly victims of the “French Disease”, i.e. Syphilis. Her zeal also led her to take care of street women, for whom she founded Il Monastero delle Pentite.

In 1530 the first Capuchins arrived in Naples and were welcomed by Maria Lorenza Longo in the outbuildings of the hospital. Three years later she practiced the same kind of hospitable charity with the Theatines.

Some women had joined her, and soon it was decided to bring to bear a new cloistered institution. On February 19, 1535, Paul III authorized her to build a monastery under the Rule of St. Clare near the hospital for incurables. A new reformed branch of sisters of the Franciscan Second Order was born, which, following the example of the Capuchins, took the same path of a poor and austere life and adopted the same name. In July 1535, the first religious entered the new monastery of Santa Maria in Gerusalemme.

On April 30, 1536, with a new papal brief, Maria Lorenza obtained the right to increase the number of sisters to thirty-three, which prompted the monastery from that day on to be known as the “Monastery of the Thirty-three”. On December 10, 1538, Paul III granted – quite exceptionally – that they benefit from the spiritual care and direction of the Capuchins.

While the year of her birth is completely uncertain, the time of her death, based on evidence from various documents, was surely to have been sometime during the second half of 1539.