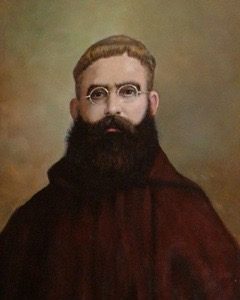 Modesto Garcia Martí was born in Albocácer, in the diocese of Tortosa in the province of Castellón de la Plana on 18 January 1880. He was the third of seven children born to Francisco García and Joaquina Martí. He was baptised on 19 January 1880 in the parish of Our Lady of the Assumption in Albocácer. He received the Capuchin habit in the same friary on 1 January 1896. He took temporary vows on 3 January 1897 and perpetual vows on 6 January 1900. He completed philosophy studies at Orihuela and theology at Massamagrell. On 19 December he was ordained to the priesthood.

He exercised most of his apostolic ministry as a missionary in Colombia in the Custody of Bogotá. On his return to Spain he was appointed Guardian for a number of years. Those who knew him spoke of him as a priest apostolically dedicated to preaching, to retreats, to spiritual direction… which were, along with other things, his preferred activities. And so those who lived with him said, “His preferred field of apostolate,” according to Pilar Beltrán, “was preaching, retreats, and the direction of souls. I have never heard criticisms of his work.” “He enjoyed the reputation of holiness both in the friary and among the faithful. “He had a peaceful temperament. His most noteworthy quality,” notes Daniel García, “was his amiability. He enjoyed a good reputation among his companions in religion and among the faithful. He was faithful in his observance of the Franciscan Rule and the Constitutions.”

At the time of the national Revolution he was guardian in Ollería (Valencia), where “the community was violently dissolved with the friary and church destroyed by fire. The friary pine grove was cut down. The enclosure walls were destroyed. Everything was reduced to nothing. When communications had been re-established, Br. Modesto went to his home town and took refuge in the home of his sister Teresa, along with his brother, a priest, Mosén Miguel, parish priest of Torrembesora. For greater safety they fled to ‘la Masá’ dairy farm. There the armed militia captured him. Br. Modesto “handed himself over with gentleness and humility, “declares Arturo Adell, “and without any protest.” “His attitude during this period,” says Pilar Beltrán, “was one of total abandon to the Lord and his was an exemplary life.” He was killed at four in the afternoon on 13 August in the depression of the “Valle” between Albocácer and the farm house, around six hundred metres from the farmhouse on the road to town. After the liberation of Albocácer his remains were exhumed and it was seen that his skull had been pierced through from one side to the other with a large nail. According to a deposition by Felipe Mateu, his remains “had been buried in a common grave in the town cemetery and now rest in a niche in the cemetery.”