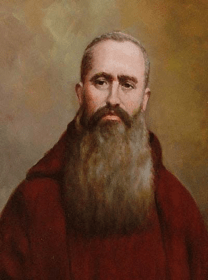 Pedro Salcedo Puchades was born in Castellar (Valencia) on 24 February 1874. He was the second of five children to Matías Salcedo and Elena Puchades. He was baptised on 25 February 1874 in his home parish. His family was poor, though profoundly Christian and devout. His childhood and youth were a reflection of that home environment. Before becoming a friar, he used to visit the Capuchins in Massamagrell every Sunday.

In his home town they remember him as “a good child, from a respected and devout family.” “He was peaceful,” one of his acquaintances says, “and his most noteworthy quality was his piety, to the point that when the rosary was prayed in the family, he did not want work to be done that would distract attention.” They say of him that “he entered religion, moved by a great love for penance.”

He became a Capuchin as a lay friar and received the habit from Br. Francisco Maria de Orihuela at Ollería on 21 July 1899. At twenty six years of age he took simple vows on 21 June 1900 before Br. Luís de Massamagrell. He made perpetual vows on 21 February 1903.

Assigned to the friary at Massamagrell, for thirty seven years he fulfilled the service of questor. His confreres spared no praise when speaking of him. “His character was simple and tranquil. He enjoyed a good reputation among his confreres and the faithful and he was a very observant religious … He was a very virtuous man, especially humble and very careful in fulfilling his religious vows … His temperament was good-natured. He was very devout to the Blessed Virgin and consecrated his life entirely to live austerity and poverty in an outstanding manner. He was very humble and full of self- denial. He had stones and nutshells in his bed for greater mortification.” He was highly regarded by everyone, both inside and outside the friary.

When the friary at Massamagrell was closed in 1936 because of the religious persecution, Br Pacificus took refuge in the home of one of his brothers where he remained for four months, dedicating himself to prayer. On the night of 12 October the militia took him away, shoving him and striking him with their rifle butts, while he recited the rosary. They went in the direction of Monteolivete as far as el Azud, near the river, where he was killed.

His nephews discovered his body the following day when they were on their way to the market. He was clasping his crucifix close to his chest with his left hand. He remains were buried in the cemetery of Valencia but could not be identified.