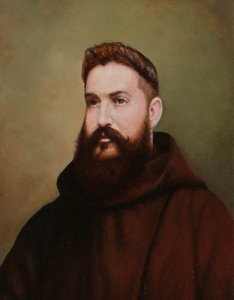 Alejandro Mas Ginestar was born in Benisa (Alicante) on 11 December 1876, the last of four children to Francisco Mas and Vicenta Ginestar. He was baptised on 12 December 1876 in Benisa. He entered the Capuchin Order, taking the habit on 1 August 1893 in the friary of Saint Mary Magdalene at Massamagrell. He made temporary vows on 3 August 1894 and final vows 8 August 1897.

On completing his studies he was ordained priest in Ollería on 22 December 1900. From that time he did apostolic work in various friaries of the Province, dedicating himself mainly to the apostolate of the young and to catechesis. He always distinguished himself for his fidelity to the Rule. “He was faithful in his observance of the Franciscan Rule and of the Capuchin Constitutions,” said Fr. Francisco Barres, resident in Massamagrell, “to the point of leaving the young a few moments before the sound of the bell for whatever fraternity activity, so that he could arrive on time.” Everyone knew him to be “a man of character, but knew how to master himself and showed himself to be person full of goodness.” Josefa Morena stated, “He was a good religious and, given his goodness, on more than one occasion he intervened with exquisite prudence to resolve difficult situations in his family.” “When he was in hiding,” declared Mercedes Lloris, “he always showed great calm. He prayed very much and we always prayed the rosary in the our family at his invitation.”

He also saw himself obliged to abandon the friary after 18 July 1936 an he took refuge in the house of some friends and then in the house of one of his sisters at Vergel (Alicante). “During this time,” recalled Mr. Barres Ferrer, “he was seen to be serene and never complained that God should permit such things. He showed patience and recited the Divine Office.” María Jansarás affirmed that “He was very well aware of the risk he and everybody ran. He said it often to my father. He very much encouraged us to pray and to be always ready to abandon ourselves into the hands of God. During his time of hiding, each time we visited him he showed himself to be resigned. He repeated to us many times that ‘we should not cry because the moment that God permitted it, that moment was good for us.’ He prayed constantly.”

The militia took him away on 26 August 1936 and then he was killed in the so-called “Alberca de Denia”. He was then buried in the cemetery of Denia. On 30 July 1939 his remains were exhumed. His skull had been completely shattered. He had been shot at least fourteen times. His remains rest in the Chapel of the Capuchin Martyrs of the friary of Saint Mary Magdalene in Massamagrell.

Br. Pedro’s sentiments when faced with death have been condensed into an expression that he repeated to his sister: “If they are coming to take me, I am ready.”