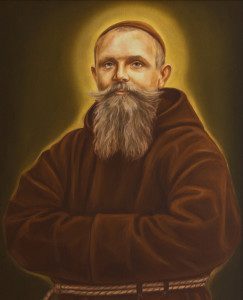 Feliks was Born to Julian Ducki and Marianna Lenardt in Warsaw on 10 May 1888, and was baptised seventeen days later. He attended elementary school in Warsaw. When the Capuchins returned to their friary in 1918 after the tsarist suppression o 1864, Feliks joined them first as an inquirer, making himself useful in the reorganisation of the friary. He became a postulant in June 1918. After a two year probation, he began his novitiate at Nowe Miasto on 19 May 1920, taking the name Symforian. The novitiate ended with temporary vows on 20 May 1921. He then devoted himself to the service of the brothers in the friaries of Watsaw, Lomza and back in Warsaw again on 27 May 1924, until his solemn profession on 22 May 1925.

In Warsaw, he first had the role of brother questor, buy in the collection of offerings for the construction of the minor seminary of Saint Fidelis. Then for a number of years he was appointed socius of the Provincial minister. A simple and friendly character, he easily won the sympathy of the people and new friends for the Order. Despite his very active life among people he never lost the spirit of prayer and devotion. In fact he distinguished himself for his devout and fervent prayer. The citizens of Warsaw highly esteemed.

At the outbreak of the Second World War he busied himself so that the brothers and the need would not be in want of the necessities. He did this until 27 June 1941 when the Gestapo arrested all twenty-two Capuchins in the Warsaw friary. At first Symforiano was interned in Pawiak, and then in Auschwitz on 3 September. He was physically robust and therefore suffered and persecutions more than the others. He bore it all silently. The paltry rations supplied by the Germans were hardly enough to meet the physical requirements of an average person. After seven months, he was condemned to a slow death.

One evening, when the Germans had begun the ghastly slaughter of the prisoners, cracking their skulls with clubs, Symfronian faced them and made the Sign of the Cross over them. An eye-witness and fellow inmate, Czeslaw Ostankowicz, states that there was a brief moment of consternation followed by the order to beat him. Br. Symforian was struck on the head by a club and he crashed to the ground at the feet of the Germans, between them and them and the prisoners. Then they murdered him. It was 11 April 1942. The death of Symforian ended the terrifying execution that the Germans were perpetrating and about fifteen prisoners were saved thanks to his intervention.  With profound veneration those prisoners carried the Fr. Symforian’s body in a cart, along with the others, to the crematorium. By his martyrdom Symforian showed great heroism and professed his faith in the Holy Trinity and saved from misfortune the lives of many of his companions.