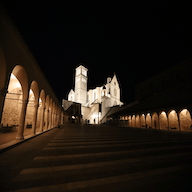 Pope Gregory IX laid the cornerstone of the magniﬁcently constructed church in honour of Saint Francis the day after the saint’s canonization in Assisi in 1228. Pope Innocent IV solemnly consecrated the church on 25th May 1253. The remains of the Seraphic Patriarch were taken in solemn procession from the chapel of Saint George to this church on 25th May 1230. On 25th March 1754 Pope Benedict XIV raised the Patriarchal Basilica to the dignity of a papal chapel.

From the Constitution of Pope Benedict XIV

The Lord keeps his word. In Holy Scripture he frequently declares that he will exalt those whom he ﬁnds like to his Son in humility. Not only does he crown them with marvellous glory and honour in the kingdom of heaven, but here on earth as well. Thus their memory enshrined in honour and glory arouses and strengthens men’s faith.

We clearly see this promise fulﬁlled in the exaltation of Saint Francis. While on earth it was his constant endeavour to be held in low esteem by himself and by others. Through the unalterable decision of the Church he has already been honoured and venerated for centuries with highest praise throughout the world as one reigning in heaven among God’s friends.

In body, Francis never ceased to care about the dying of Christ. At his death, that body was made resplendent with extraordinary signs and marvels from heaven. It was so venerated by the devotion of the people that his sepulchre became more glorious than the pretentious monuments of powerful worldlings.

Scarcely a year after the death of Francis, a place for the remains of the Servant of God was under consideration. When a suitable location near the walls of Assisi had been offered, our predecessor Gregory IX accepted the place as the property of the Apostolic See. Moreover, he decreed that the church to be erected thereon should be subject to the Apostolic See alone. Later, after the same Pope Gregory had enrolled the glorious patriarch in the catalogue of saints at Assisi, he personally laid the cornerstone of the church and declared it to be the chief and mother church of the order of Friars Minor.

After the body of Saint Francis was transferred there with memorable solemnity and the church was completed, Pope Innocent IV solemnly consecrated it on the Sunday before the feast of the Ascension of our Lord in the Year 1253.

Following the example of so many of our predecessors we, too, have been willingly led to add to the splendour and honour of this church. This is the chief reason that motivated us: We concluded that the more the Apostolic See honoured the memory of Saint Francis, the more could the Roman Church hope for greater protection through his intercession. Therefore, by means of this our constitution, valid in perpetuity, we raise the aforesaid church to the dignity of a Patriarchal Basilica and Papal Chapel.

Lord God,
you choose men as living stones
to become an eternal dwelling,
built to the glory of your name.
Increase your gifts of grace to the Church.
Through the prayers of our Blessed Father Francis
may your faithful people
through in ever greater numbers
to form the heavenly Jerusalem.
We ask this through our Lord Jesus Christ, your Son,
who lives and reigns with you and the Holy Spirit,

ne God for ever and ever. Amen.