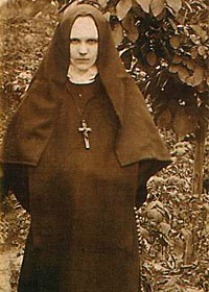 Maria Teresa Kowalska was born in Warsaw in 1902. She received the habit of a Capuchiness Poor Clare in the convent at Przasnysz on 12thAugust 1923. She made her temporary vows the following year on 15thAugust 1924 and her perpetual vows in 1927. Notwithstanding the sickness which afﬂicted her, she was always very affable with everyone. She was noted for her prayerfulness and her hard work. On 2ndApril 1941 the German soldiers burst into the convent and arrested all the sisters. They were transferred to the concentration camp of Dzialdowo. She died from the effects of her imprisonment on 25thJuly 1941. She had offered her sufferings to God to obtain the freedom of her sisters, which happened two weeks after her death. She was beatiﬁed by Saint John Paul II on 13thJune 1999 together with a group of another 107 martyrs from the Second World War.

In the list of 108 blessed martyrs of Nazism proclaimed on 13 June 1999, John Paul included the Capuchin Poor Clare Maria Teresa Kowalska. Born in 1902 she was baptised Mieczyslawa. The names and background of her parents are unknown. She received first Holy Communion in 1915 and Confirmation in 1920. Two years later, moved by socialist ideals, her father decided to emigrate to the Soviet Union with some members of the family. This decision also stemmed from his disappointment regarding the formidable growth and political influence of the Catholic Church in Poland. His courageous daughter, on the other hand, not only remained faithful to her land but also chose to enter the monastery of Capuchin Poor Clares in Przasnysz.

Her decision was the fruit of her pious and exemplary life, as is evident from her religious note book, a kind of personal chronicle of her life, which documents her membership in various confraternities and pious associations. At her investiture she received the name of Maria Teresa of the Child Jesus. On 26 June 1928 she professed her perpetual vows. Although she was of slight build, she was always attentive to her monastic sisters, and ready to carefully carry out whatever task was entrusted to her: porter, sacristan, librarian, novice mistress. As one sister tells, “Her way of doing things won the trust of everyone.” The community elected her to their monastic council. In her notebook Sister Teresa wrote down her thoughts, he aims, and some of the special episodes of her daily life. We know from these pages that she chose the difficult, enclosed life of the Capuchin Poor Clares in order to serve God and to offer herself in expiation for the sins of her family that had allied itself with communism. Soon, she would have the opportunity to realise that wish in a radical way, but also for her monastic sisters.

On 2 April 1941, after the Germans had invaded Poland, the monastery of Przasnysz was occupied and the thirty six nuns arrested and sent to the concentration camp at Dzialdowo. Also interned in that camp were bishops and priests. Although the sisters were closed in a separate barracks, they were subjected to the same sufferings and inhuman deprivations as everyone else: lack of hygiene, little room to move and little living space and no fresh air. Add also to these torments hunger and thirst. After one month many of the sisters fell ill.

already in the monastery Sister Teresa had suffered tuberculosis and could not walk or stand. Extreme weakness, accompanied by a continuous lung haemorrhage, slowly reduced her. There were neither doctor nor medicine for her. Still, the young sister endured the sufferings patiently, praying both by herself and participating in the prayer of the others. Despite the countless privations, the sisters were fortunately able to maintain the recitation of the Breviary.

Sister Teresa’s physical condition deteriorated. One day she said, “I will not leave here alive. I offer my life for the sisters so that they may return to the monastery.” Sometimes she asked the Abbess, “Mother, will this last much longer? Will I die soon?” She died on the night of 25 July 1941. Her body was taken away, probably to be cremated.

“Blessed are the merciful, for they shall obtain mercy.” This Sunday’s liturgy gives our thanksgiving a particular aspect. It enables us to see all that is going on in the history of this generation from the perspective of God’s eternal mercy, which was revealed more fully in the saving work of Christ. Christ “was put to death for our trespasses and raised for our justiﬁcation”. The Paschal mystery of the Death and Resurrection of the Son of God has given a new direction to human history. Though we see in this history the painful signs of the action of evil, we are certain that in the end evil will not prevail over the fate of man and the world. The certainty arises from faith in the mercy of the Father “who has so loved the world that he gave his only Son, that whoever believes in him should not perish but have eternal life”. Hence today, as Saint Paul points to the faith of Abraham: “No distrust made him waver concerning the promise of God, but he grew strong in his faith as he gave glory to God”, we are able to discern the source of this strength, thanks to which not even the most difﬁcult trials were able to separate us from the love of God.

“Lord Jesus Christ, protect me with the sign of y our most Sacred Cross: and grant that, as I hold this Cross, ﬁlled with the relics of your Saints, before my breast, I may always be mindful of the sufferings and the victories of Your, holy Martyrs”: this is the prayer recited by the Bishop as he puts on the pectoral cross. Today I make this invocation the prayer of the entire Church in Poland which, bearing for a thousand years the marks of the Passion of Christ, is constantly regenerated by the seed of the blood of the martyrs and draws life from the memory of their victory on earth.

Today we are celebrating the victory of those who, in our time, gave their lives for Christ, in order to possess life forever in his glory. This victory has a special character, since it was shared by clergy and laity alike, by young people and old, by people from different classes and states. Among them are Archbishop Antoni Julian Nowowiejski, Pastor of the Diocese of Plock, tortured to death at Dzialdowdo: Bishop Wladyslaw Goral of Lublin, tortured with particular hatred simply because he was a Catholic Bishop. There are diocesan and religious priests who died because they chose not to abandon their ministry and because they continued to serve their fellow prisoners who were sick with typhus; some were tortured to death because they defended Jews. In the group of Blessed are religious brothers and sisters who persevered in the service of charity and in offering their torments for their neighbour. Among the blessed martyrs there are also lay people. There are ﬁve young people formed in the Salesian oratory; a zealous activist of Catholic Action, a lay catechist tortured to death for his service and an heroic woman, who gave up her own life in exchange for that of her daughter‐in‐law who was with child. These blessed martyrs are today inscribed in the history of holiness of the People of God on pilgrimage for over a thousand years in the land of Poland.

If we rejoice today for the beatiﬁcation of one hundred and eight martyrs, clergy and lay people, we do so above all because they bear witness to the victory of Christ, the gift which restores hope. As we carry out this solemn act, there is in a way rekindled in us the certainty that, independently of the circumstances, we can achieve complete victory in all things through the One who has loved us. The blessed martyrs cry to our hearts: Believe in God who is love! Believe in him in good times and bad! Awaken hope! May it produce in you the fruit of ﬁdelity to God in every trial! Rejoice, Poland, for the newly beatified. See “the immeasurable riches of his grace” in kindness towards your sons and daughters in Jesus Christ. This is “the richness of his grace”, this is the foundation of our unshakeable conﬁdence in the saving presence of God along the paths of man in the Third Millennium! To him beglory for ever and ever.

God,
who delight your Church
with the memory of Blessed Maria Teresa,
the virgin and martyr;
through her intercession and example
grant us strength and purity of spirit
to follow Christ in the way of the cross,
who lives and reigns with you,
in the unity of the Holy Spirit,
God, forever and ever. Amen.