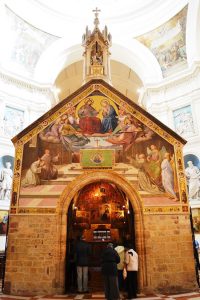 The Seraphic Father Francis, on account of the special love which he had for the Blessed Virgin, was particularly devoted to the little chapel known as Our Lady of the Angels or the Portiuncula. There he founded the Order of Friars Minor, there he prepared the foundation of the Poor Clares, and there he happily ended his earthly life. Tradition tells us that in the same chapel St Francis obtained the famous indulgence. That indulgence the Supreme Pontiffs conﬁrmed and extended to many other churches. In thanksgiving for so many great blessings, it is permitted to celebrate a liturgical feast today, which is the anniversary of the dedication of the chapel.

From the writings of Thomas of Celano

The servant of God Francis, a person small in stature, humble in mind, a minor by profession, while yet in the world chose for himself and his followers a little portion, in as much as he could not serve Christ without having something of the world. For it was not without the foreknowledge of a divine disposition that from ancient times that place was called the Portiuncula which was to fall to the lot of those who wished to have nothing whatsoever of the world. For there had also been built in that place a church of the Virgin Mother, who merited, by her singular humility to be, after her Son, the head of all the saints. In this church the Order of Friars Minor had its beginning; there, as on a firm foundation, when their number had grown, the noble fabric of the Order arose. The holy man loved this place above all others; this place he commanded his brothers to venerate with special reverence; this place he willed to be preserved as a model of humility and highest poverty for their Order, reserving the ownership to others, and keeping only the use it for himself and his brothers.

The most rigid discipline was observed there in all things; both as to silence and work and as to the other ordinances of the Rule. To no one was admittance there granted except to especially appointed brothers who, coming from all parts of the world, the holy man wanted to be devoted to God and perfect in every way. So too admittance was prohibited to every secular person. He did not want the brothers dwelling there, who were restricted severely as to number, to have itching ears for news of worldly things, lest, with their meditation on heavenly things interrupted, they should be drawn to the business of inferior things through those who spread rumours. It was not permitted to anyone there to utter idle words or repeat those uttered by others. If anyone at any time did this, he was taught through punishment to be careful not to let it happen again. Those who dwelt in this place were occupied with the divine praises without interruption day and night, and fragrant with a wonderful odour, they led an angelic life.

Though he knew that the kingdom of heaven was set up in all the habitations of the land and believed that the grace of God was given to the elect of God in every place, he had however experienced that the place of the church of Saint Mary of the Portiuncula was endowed with more fruitful graces and visited by heavenly spirits. Therefore he often said to his brothers: “See to it, my sons, that you never abandon this place. If you are driven out from one side, go back in at the other. For this place is truly holy and is the dwelling place of God. Here, when we were but a few, the Most High gave us increase; here he enlightened the hearts of the poor ones by the light of his wisdom; here he set our wills aﬁre with the ﬁre of his love. Here he who prays with a devout heart will obtain what he prays for and he who offends will be punished more severely. Wherefore, my sons, consider this dwelling place of God to be worthy of all honour, and with all y our heart, with the voice of joy and praise, give glory to God in this place.”

Lord,
as we honour the glorious memory
of the Virgin Mary, Queen of Angels,
we ask that by the help of her prayers
we too may come to share the fullness of grace.
Through our Lord Jesus Christ, your Son,
who lives and reigns with you and the Holy Spirit,
one God, for ever and ever. Amen.