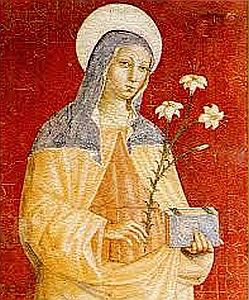 Born in Assisi in 1193, Clare followed her fellow citizen Francis along the way of Poverty and became the Mother and Foundress of the Second Franciscan Family. She began her religious life by fleeing from her aristocratic family home on Assisi on Palm Sunday evening, 1212 to the church of St Mary of the Angels – the Portiuncula – where St Francis and his friars ritually received her. She lived a very austere life and one full of works of charity and piety. In 1253, Pope Innocent IV approved the rule she composed, preserving the radical commitment to poverty, to which she clung throughout her life. She died shortly after in 1253 and was canonised by Pope Alexander IV in 1255.

Consider the poverty, humility and charity of Christ

Happy the soul to whom it is given to attain this life with Christ, to cleave with all one’s heart to him whose beauty all the heavenly hosts behold forever, whose love inﬂames our love, the contemplation of whom is our refreshment, whose graciousness is our delight, whose gentleness ﬁlls us to overﬂowing, whose remembrance makes us glow with happiness, whose fragrance revives the dead, the glorious vision of whom will be the happiness of all the citizens of the heavenly Jerusalem. For he is the brightness of the eternal glory, the splendour of eternal light, the mirror without spot. Look into that mirror daily, 0 queen and spouse of Jesus Christ, and ever study therein your countenance, that within and without you may adorn yourself with the ﬂowers and garments that become the daughter and chaste spouse of the most high King. In that mirror are reﬂected poverty, holy humility and ineffable charity, as, with the grace of God, you may perceive.

Gaze ﬁrst upon the poverty of Jesus, placed in a manger in swaddling clothes. What marvellous humility! What astounding poverty! The King of angels, Lord of heaven and earth, is laid in a manger. Consider next the humility, the blessed poverty, the untold labours and burdens which he endured for the redemption of the human race. Then look upon the unutterable charity with which he willed to suffer on the tree of the cross and to die thereon the most shameful kind of death. This mirror, Christ himself, ﬁxed upon the wood of the cross, bade the passer-by consider these things: “All you who pass this way look and see if there is any sorrow like my sorrow.” With one voice and one mind let us answer him as he cries and laments, saying in his own words: “I will be mindful and remember and my soul shall languish within me.” Thus, 0 queen of the heavenly King, may you ever burn more ardently with the ﬁre of his love. Contemplate further the indescribable joys, the wealth and unending honours of the King, and sighing after them with great longing, cry to him: “Draw me after you: we shall run to the fragrance of your perfumes, O heavenly bridegroom.” I will run and faint not until you bring me into the wine cellar, until your left hand be under my head and your right hand happily embrace me and kiss me with the kiss of your mouth.

In such contemplation be mindful of your little mother and know that I have inscribed your happy memory indelibly on the tablets of my heart, holding you dearer than all others.

Lord God,
in your mercy you led Saint Clare
to the love of poverty.
Help us, by her intercession,
to follow Christ in poverty of spirit,
so that, in the kingdom of heaven,
we may see you in your glory.
We ask this through our Lord Jesus Christ, your Son,
who lives and reigns with you and the Holy Spirit,
one God, forever and ever. Amen.