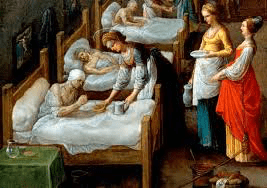 Elizabeth was born in the year 1207, the daughter of Andrew, King of Hungary. Given in marriage while still a child to Louis, Landgrave of Thuringia, she bore him three children. Intent on heavenly contemplation, after her husband’s death she embraced poverty. She founded a hospital where she herself served the sick. She died at Marburg in the year 1231. She was canonized by Gregory IX in 1235.

A reading from the letter of Conrad of Marburg, Saint Elizabeth’s spiritual director

Elizabeth saw Christ in his poor, and loved them

From that time onwards Elizabeth’s holiness began to come to its full ﬂower. All her life she had been the comfort of the poor: now she became the helper of the starving. Outside one of her castles she built a hospice and gathered in it sick, diseased and crippled men and women. Besides, anyone who came asking for alms received unstinted gifts from her charity. She did the same wherever her husband’s jurisdiction ran, pouring out all the resources she had in parts of his territories, until in the end she sold even her jewels and her sumptuous dresses.

She went twice a day to see the sick, in the early morning and at nightfall, and it was those with the foulest diseases she made her personal care. She fed them herself, made and cleaned their pallets, carried them in her arms, and nursed them in whatever way they needed. Her husband of happy memory, gave a completely ungrudging consent to all she did. When he died she felt she should now attempt the heights of perfection. She came to me and begged me with tears to let her beg her way from door to door.

On the Good Friday of that year, after the altars had been stripped, she knelt in front of the altar of the chapel she had given to the Friars Minor and laid her hands on it. Then, in their presence she renounced her own will, her earthly estate and all that our Saviour counsels us in the Gospel to put aside.

After she had made these vows she realized she could still ﬁnd herself embroiled in the noisy affairs of government and drawn back into the worldly magniﬁcence in which she had had to live in her husband’s lifetime. Against my wishes she followed me to Marburg where she built a hospice in the town and gathered the sick and the disabled into it, and attended the more wretched and degraded at her own table.

But all this was only her outward activity. I say this before God: I do not think I have ever seen a woman more rapt in the contemplation of God. When she came to her private prayers, certain friars and nuns saw her many times, her face transfigured with light and the sun itself as it were shining out of her eyes.

I heard her confession before she died. I asked what was to be done with her property and her dresses. She said that whatever remained to her belonged to the poor, and she laid it on me to distribute all of it to them, with the exception of one worn‐out dress in which she wanted to be buried. Then she received our Lord’s Body.

Thereafter, until Vespers, she spoke often of the holiest things she had heard in sermons. After that she prayed lovingly for all around her and then, as if falling asleep, she died.

Lord God,
you taught Saint Elizabeth of Hungary
to see and reverence Christ in the poor.
May her prayers help us
to give constant love and service
to the afflicted and the needy.
Through our Lord Jesus Christ, your Son,
who lives and reigns with you and the Holy Spirit,
one God, forever and ever. Amen.