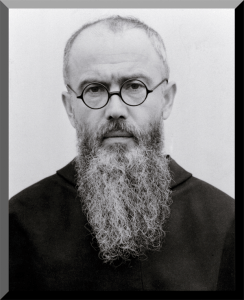 Maximilian Mary Kolbe was born in Poland in 1894. He entered the Order of Friars Minor Conventual and was ordained a priest in Rome in 1918; His ardent love for Mary the Virgin Mother of God inspired him to found a sodality which he called the Militia of Mary Immaculate. This he promoted in his native land and in other countries as well. His missionary activity in Japan was also placed under the patronage of the Immaculate Virgin. On returning to Poland he endured many trials as he worked in the area of Oswiecim in the district of Cracow during World War II. He brought his life of activity to a close by offering himself as a victim of love at Auschwitz. He died on 14th August 1941 and was canonised by Saint John Paul II on 12th October 1982.

From the letters of Saint Maximilian Kolbe

Dear Brother: that I am ﬁlled with great joy because of the glowing zeal that motivates you to promote God’s glory. We see with sorrow that an epidemic of indifferentism in various forms is spreading in our times, not merely among people in the world but , even among religious. Since God is worthy of inﬁnite glory, it is our prime concern to render him the greatest possible glory even if, through human weakness, we fail to give him all he deserves.

God’s glory is especially resplendent in the salvation of souls redeemed by Christ’s blood. Let this, then, be the chief goal of your apostolic work, the salvation and sanctiﬁcation of the greatest number of souls. I shall tell you brieﬂy the most suitable way to attain this end. God who is inﬁnite knowledge and wisdom, and who consequently knows best what we must do to promote his glory makes his will known to us particularly through those who take his place on earth.

It is therefore obedience, and only obedience, which clearly shows us God’s will. It can happen, to be sure, that a superior makes a mistake, but it cannot happen that in following obedience we make a mistake. Only then is there an exception to obedience when a superior commands something that would clearly be a violation of God’s law, even in a very small matter. In such a case the individual himself would be the interpreter of God’s will.

God, and only God, is inﬁnite, most wise, most holy, a most loving Lord, our father and creator, our beginning and end, our wisdom, power and love ‐ God is our all. Everything outside of God has value only in so far as it is referred to him who is the creator of all things, the redeemer of mankind, the ﬁnal end of all creation. He it is therefore who makes known his adorable will through those who take his place on earth. He draws us to himself and, through us, the souls of others he intends to unite to himself in more perfect love.

Dear brother, by God’s see the greatness of man’s dignity conferred by God’s mercy. By obedience we surmount, so to speak, the limits imposed upon us b your weakness; we are made conformable to God’s will which in his inﬁnite wisdom and prudence guides us to act correctly. As a matter of fact by clinging to God’s will ‐ and no creature can resist it ‐ we surpass everything in power. This is the way of wisdom and prudence, this is the only way we can render the greatest glory to God. If there were another and more suitable way Christ surely would have showed it to us by his own words and example. But Sacred Scripture described his long sojourn in Nazareth in these words: “He was subject to them” and painted the picture of the rest of his life for us in the colours of obedience thus showing that he had come upon earth to do the will of his Father.

Therefore, my brothers, let us love our most loving Father in heaven with the greatest love and let our obedience be the proof of our perfect love which we put into practice especially when we are asked to give up our own will. There is no more authoritative book to teach us how to grow in God’s love than the book of Jesus cruciﬁed.

We shall achieve all this through the Immaculate Virgin whom a most loving God in his mercy gave us. There is no doubt that Mary’s will in our regard is the will of God. When we dedicate ourselves to her we become instruments of God’s mercy just as she was in God’s hands. Let us be guided by her, led by her. Let us feel calm and safe under her guidance. She will look after all our needs and quickly provide everything necessary or soul and body. She will remove our difﬁculties and trials.

Heavenly Father,
you inflamed blessed Maximilian the priest
with love for the Immaculate Virgin
and filled him with zeal for souls and love of neighbour.
Through his prayers grant us to work strenuously
for your glory in the service of men,
and so be made conformable to your Son until death.
We ask this through our Lord Jesus Christ, your Son,
who lives and reigns with you and the Holy Spirit,
one God, forever and ever. Amen.