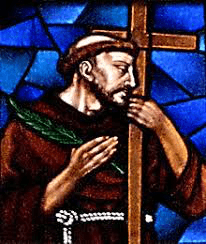 Nicholas was born at Sibenik in Croatia about the year 1340; for several years he preached the Gospel in Bosnia, together with Friar Deodatus of Rodez in the province of Aquitaine; both went to Palestine in 1384. Then, with their confreres Stephen of Cunes near Genoa and Peter of Darbonne, they composed a defence of the Christian faith which, after seeking help in prayer, they delivered before the Cadi of Jerusalem in 1391. Bidden to retract what they had proclaimed, they refused, and as a result were cast into chains and condemned to death; their bodies were dismembered and burned. They were canonized by Saint Paul VI in 1970.

Nicholas and his companions had discussed for a long time how best they might win souls for God when the devil was seeking to destroy them; how best they could offer the most High God an abundant harvest in this Holy Land of Jerusalem. They took advice from theologians and proven brethren living in Jerusalem, armed themselves with arguements from Scripture and biblical scholars they had read elsewhere and felt strengthened in the Lord as to how a perfect man might successfully confront men of the world. So it came about that on the feast of Saint Martin, 11th November 1391, about the third hour, they set aside their fears and decided to put into effect, step by step, what they had long been planning. So they set out together, each bringing with him a sheet or roll written in Italian and in Arabic. They went ﬁrst towards the temple of Solomon (the Mosque of the Rock), but were stopped when they tried to enter.

Brought to the house of the Cadi, they immediately produced their rolls and began to read them before him. Then, the Cadi addressed them thus: “These words which you have just read to me, did you say them as wise and prudent men in possession of your wits, or as fools who have lost all mind and reason? Were you sent here by your Pope or by some Christian king? ” The friars answered in great seriousness and gentleness, yet with great zeal and a desire to bring him to salvation: “We have not been sent by any man,” they said, “ but by God alone, who has deigned to inspire us to preach to you and show you the truth whereby you may be saved; for Christ says in his Gospel: ‘He who believes and is baptized will be saved; he who does not believe will be condemned.”” Then the: Cadi asked them: “Do you wish to retract all that you have said and become Saracens ‐ and so save your lives? For otherwise you are going to die.” They answered in a loud voice: “By no means do we take back what we have said. Nay rather, we are ready to die for the truth we have proclaimed, and in defence of the Catholic faith we would rather die and suffer all manner of torment, because all that we have said is holy, Catholic and true.” When the Cadi heard these words, he and his council passed sentence of death upon them!

Hardly had the judgment been uttered when all the Saracens who had gathered near the house rose up with a great shout: “To death with them! Let them die!” They fell on the friars and beat them with whatever they had at hand, so that they fell to the ground half‐dead. This was about the ninth hour, and due to the popular outcry, they lay there until midnight.

Then about midnight the Cadi had them stripped naked and tightly bound to stakes and so cruelly beaten that there was not a sound spot left on their bodies and they were too weak to stand. Then the Cadi had them taken to a dark dungeon and securely bound in wooden stocks, so that they could have no respite or relief, but be in constant pain and torment.

Finally, on the third day they were led out into the square where criminals were usually punished, before the Emir and the Cadi and an immense crowd of Saracens and soldiers with drawn swords and scimitars, and a great ﬁre blazing in the centre. Once more they were asked if they wished to renounce what they had said and become Saracens and so escape death. They answered: “No, this is what we want, and we tell you again to be converted to the faith of Christ and be baptized. Know that for Christ and his teachings we fear neither ﬁre nor bodily death.” When the crowd of Saracens heard these words, they were beside themselves with anger and all rushed upon them, hacking them so to pieces with their swords that nothing human could be recognized in what remained. They then threw them into the ﬁre; and yet their bodies thus dismembered refused to burn. And through that whole day long the crowd did not abandon this marvellous sight, but kept adding to the ﬁre, scattering the ashes and hiding the bones lest the Christians should ﬁnd them again.

O God,
you glorified blessed Nicholas and his companions
with zeal for spreading the faith
and by the palm of martyrdom.
Grant us, we beg you,
through their example and intercession
to hasten in the way of your commandments,
so that we may merit to receive the reward of eternal life.
We ask this through our Lord Jesus Christ, your Son,
who lives and reigns with you and the Holy Spirit,
one God, for ever and ever. Amen.