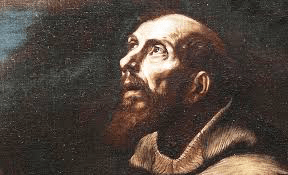 Peter was born in the year 1499. After completing his studies at Salamanca, he entered the Order of Friars Minor. After his ordination to the priesthood he discharged diverse ofﬁces in the Order. In the year 1554 he obtained permission for a more rigorous observance of the Rule, and thenceforward began to have companions. He trained them in penance, abstinence, prolonged prayer, and strict poverty. Urged by his zeal for souls he applied himself with great fruit to preaching and by his advice assisted Saint Teresa of Avila in her activity among the Carmelites. He also wrote books in which he related his own spiritual experience, sustained as it was principally by his devotion to the passion of Christ. He died on 18th October in the year 1562. He was canonized by Pope Clement IX in 1669.

From a letter of Saint Peter of Alcantara to Saint Teresa

How sweet is God to those who serve him

It is no small wonder to me that your Ladyship should have entrusted an affair of this kind to men of culture, which is outside their province. For when it is a question of litigation or of matters of conscience, it would be praiseworthy to consult lawyers and theologians, and to abide by their opinions. But with regard to the life of perfection, one ought to take counsel only from those who aim at it themselves. Right reason suggests that the study and clear exposition of their works proves that no better ruling or opinion on this matter can be had. Where the evangelical counsels are concerned, there is no need of outside assistance, unless it be to consider whether they should be embraced or whether they can be observed, and this is a most sure sign of unfaithfulness.

For the counsel of God can be nothing but good, nor can its observance be difﬁcult except for the incredulous, or for those who have scant trust in God. These prefer rather to put their trust solely in the rules of human prudence. But he who offers advice will also bestow his assistance, seeing that he is powerful in all things. Man of himself cannot be the author of any good counsel, however much he may desire to appear good, for by nature he is evil. How much more is he who is goodness itself willing and able to enable those who follow his advice to make progress in goodness.

If anyone wishes to follow the counsels of Christ concerning greater perfection, let him follow them in a way which is just as possible for women as for men. He will bring him to a successful ending just as he has done for many others who have followed in his footsteps. But if anyone desires to give heed to the advice of learned but unspiritual men, let him attempt to arrive successfully at is goal, so that he may learn by personal experience whether this is better than to rely on the Lord’s gentle urgings to go forward without any earthly goods.

When we see certain imperfection’s in the monasteries of poor women, let us consider that this has come to pass mainly because they endure this poverty unwillingly, instead of embracing it as a divine counsel: I do not praise poverty as such, but only that which we endure patiently out of love for our Cruciﬁed Redeemer and that, still more to be desired, which we freely undertake out of love for him. For if I were to think otherwise, or believe with a ﬁxed determination, I should not consider myself to be very secure in my faith. But in all these matters I put my trust in Christ, and ﬁrmly believe that his counsels, being divine, must be the best. And although they do not oblige under pain of sin, a person may be obliged to strive for a greater degree of perfection in imitation of our Lord, so that if he abandoned its pursuit he could not do so without fault. I say that these counsels oblige because they urge him towards perfection, and thus render him holier and more pleasing to God. I think therefore that as the Lord himself has said, blessed are the poor in spirit, provided they are so of their own free choice. I myself have experienced this, although I would rather believe in God than in my own experience.

May the Lord grant your Ladyship so much light that you may understand this truth and base your life on it. And you should not give credence to those who state the contrary, be it from disbelief, or from their never having tasted how sweet God is to those who serve and love him, and who, for his love, give up all unnecessary earthly goods. Men of this kind are enemies of the Cross of Christ, and do not believe in the glory which will be theirs in the end.

May I also add that your Ladyship should not waver in the face of so manifest a truth, nor accept advice except from those who have embraced the evangelical counsels. For although others who observe the precepts to which they are obliged will be saved, yet generally speaking they have only that degree of light which is given for the works which they perform. And however good may be the advice of others, the advice of Christ our Lord will be better since he bestows help for the perfecting of the same gift, and in the end renders rewards to those who place their full trust in him, and not in earthly goods.

O God,
you glorified blessed Peter
with the gift of wonderful penance and lofty contemplation.
Mercifully grant
that through his merits
we may mortify our flesh,
and deserve to share in the gifts of heaven.
Grant this through our Lord Jesus Christ, your Son,
who lives and reigns with you, and the Holy Spirit,
one God, forever and ever. Amen.