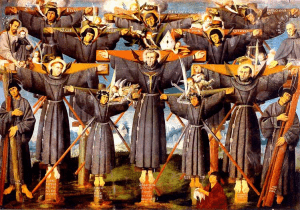 Peter Baptist was born in Spain in 1542. After his ordination he went as a missionary to Mexico and then to the Philippines. With five companions he undertook missionary work in Japan in 1593 where he built several churches and hospitals. In an atmosphere of religious unrest and political upheaval, arrests were made and the six Franciscans with three Jesuits and fifteen members of the Third Order were all sent to Nagasaki, paraded as a public spectacle, and then crucified on 5 February 1597. They were canonized by Blessed Pope Pius IX in 1862.

A reading from the letters of Saint Peter Baptist

We lose our life for the sake of preaching the Gospel

Of the brethren who are here six have been arrested and kept in prison for several days, together with three Japanese Jesuits of whom one is a professed religious, and some of the laity. We are twenty-four all told. We are now on the road in this rather bitter winter, and have an escort and a very imposing guard. Some days there are as many as two hundred men sent to guard us. Despite all this we wend our way very happy in the Lord and comforted by him, since the sentence passed on us friars is that we are to be crucified for preaching the law of the Lord and so contravening the royal edict: the others, for being Christians. This is the opportunity for those anxious to die for Christ. To my mind it would have been a great support to the faithful if the religious of our Order had been here. They should be in no doubt that as long as this king is in command, they will not remain long in the Franciscan habit in Japan: he will dispatch them post‐haste to eternal life, which is our destination too.

The sentence of condemnation is written on a placard and carried in front of us. It says that we have been condemned for preaching the Nauan (Christian) law contrary to the edict of Taicosama and that we are to be crucified at Nagasaki. We are deeply happy and comforted in the Lord that our lives are forfeit for the preaching of the Gospel. There are six of our brethren and eighteen Japanese all for execution, some for preaching, some for professing the Christian faith. Of the Jesuits, one is a lay brother, one a catechist and one a layman.

They took us from prison and put us on wagons. We each of us suffered partial mutilation of one ear and were shown off round the streets of Meaka, surrounded by people and soldiers, and finally returned to prison. Another day we were manacled and led by mounted guards to Osaka. The next time we were led on horseback for the parade through the town. They then took us to Sacay and repeated the performance. In all three cites there was always a public harangue. We knew we were to die but it was only when we came to Osaka that we were informed that our destination was Nagasaki. For the love of God, let your charity zealously commend us to God that the sacrifice of our lives may prove acceptable to him. From what I hear, I gather that our crucifixion is set for next Friday; that was the very day they mutilated our ears at Meaka. That we accepted as a gift from God. So now all of us beg you with all our hearts, for the love of God, keep us in your prayers.

My dearest brothers, support us now with your prayers that our death may be acceptable to the divine majesty; in heaven, whither, God willing, we hope to go, we shall be mindful of you. I have not forgotten your love, not even here. I loved you and do love you with all my heart. I commend to you the peace and love of our Lord Jesus Christ. Farewell, my very dear brothers. Time for talking has run out. Till we meet in heaven. Remember me.

0 God,
you are the strength of your saints.
You called Saint Peter Baptist and his companions
to eternal life by way of martyrdom a n d the cross.
Grant, through their intercession,
that throughout our lives
We may hold courageously to the faith we profess.
We ask this through our Lord Jesus Christ, your Son,
Who lives and reigns with you and the Holy Spirit,
God, for ever and ever. Amen.