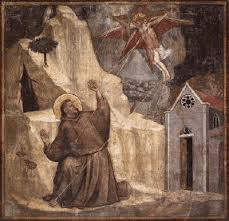 From the very beginning of his conversion our seraphic Father Francis used to meditate on the cruciﬁed Christ with the utmost love and devotion, and never ceased until the day of his death to preach Christ to all by word and example. In the year 1224, while he was rapt in contemplation on La Verna, Christ our Lord worked a most wonderful prodigy: he reproduced in Francis’ body the marks of his own Passion. This well-known happening was attested by trustworthy witnesses, and Benedict XI allowed the Friars Minor to recall it each year by celebrating the anniversary on this day.

A reading from Saint Bonaventure on the sacred stigmata

Two years before his death, Francis, faithful servant of Christ, was led by divine providence to a high mountain called La Verna, where he could be alone. There he began a forty‐day fast in honour of Saint Michael the Archangel, as was his custom, and he soon experienced an extraordinary in‐pouring of divine contemplation. He was all on ﬁre with heavenly desires and he realised that the gifts of divine grace were being poured out on him in greater abundance than ever.

The fervour of his seraphic longings raised Francis up to God and in an ecstasy of compassion made him like Christ who allowed himself to be cruciﬁed in the excess of his love. Then one morning about the feast of the Exaltation of the Holy Cross, while he was praying on the mountainside, Francis saw a seraph with six fiery wings coming down from the highest point in the heavens. The vision descended swiftly and came to rest in the air near him. Then he saw the image of a man cruciﬁed in the midst of the wings, with his hands and feet outstretched and nailed to a cross. Two of the wings were raised above his head and two were stretched out in ﬂight, while the remaining two shielded his body. Francis was dumbfounded at the sight and his heart was ﬂooded with a mixture of joy and sorrow. He was overjoyed at the way Christ regarded him so graciously under the appearance of the seraph, but the fact that he was nailed to a cross pierced his soul with a sword of compassionate sorrow.

As the vision disappeared, it left his heart ablaze with eagerness and impressed upon his body a miraculous likeness. There and then, the marks of the nails began to appear in his hands and feet, just as he had seen them in the vision of the man nailed to a cross. His hands and feet appeared pierced through the centre with nails, the heads of which were in the palms of his hands and on the instep of each foot, while the points stuck out on the opposite side. His right side seemed as if it had been pierced with a lance and was marked with a livid scar which often bled.

True love of Christ had now transformed his lover into his image, and when the forty days which he had intended spending in solitude were over and the feast of Saint Michael had come, Saint Francis came down from the mountain. With him he bore the representation of Christ cruciﬁed which was not the work of an artist in wood or stone, but had been reproduced in the members of his body by the hand of the living God.

Almighty God,
you renewed the marks of the sufferings of Jesus
in the body of our holy Father Francis
in order to inflame our hearts
with the fire of our love.
Through his prayers
may we be made conformable to the death of your Son
and thus share also in his resurrection.
We ask this through our Lord Jesus Christ, your Son,
who lives and reigns with you and the Holy Spirit,
one God, forever and ever. Amen.